The Longest Ride focuses on two amazing love stories- one - Luke a champion bull rider and Sophia an Art student. As their lives are worlds apart the strength of their love is tested. Second - They are inspired by Ira, an old man they meet in fateful circumstances. They are deeply moved by his captivating love story and also the devotion he had to his late wife. A very enjoyable and sweet movie. Anne

Book Review—Better Living Through Criticism: How to think about Art, Pleasure, Beauty, and Truth by A.O. Scott

Before we being the review proper, let’s just savour the fact that this review is an exercise in meta-meta-meta-criticism—a critique of a text that critiques common criticism of criticism. Scott’s central thesis is the ever elusive link between art and criticism, and how they respond to and influence each other. This, as is the title, is certainly ambitious in its intent and nebulous in its parameters, covering a discussion of art, pleasure, beauty, and truth all through the prism of criticism. 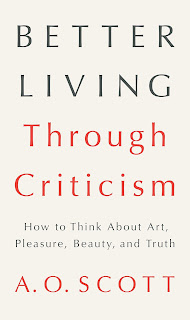 It broadly falls into a category of works that promote the idea of art as self-help, much in the vein of McCall-Smith’s What W.H. Auden can do for you, or De Botton’s How Proust can change your life. But Scott’s approach is altogether more rigorous and larger in scope, and his conclusions are less directly palatable and less definitely inclusive. Although the body of the text carries over much of the nebulousness of the title, it does delve as it expands, usually with the aid of likes T.S. Elliot, Hesiod, and Rainer Maria Rilke. The ground covered is certainly vast, with its examples sometimes straining to reel-in its intent.

For Scott, the act of creation stems from the same urge that spawns criticism. Again, as Scott’s reading list attests, this is nothing new, but reminders of the concept can be timely and welcome. It takes the broad view that “everyone’s a critic”, not as some dismissive notion, but as an enlivening assertion that everyone responds to things they watch, read, and hear. But this comes with a caveat: although art is democratic (at least in today’s society), accessible to all, that does not mean that all will be overcome by Rilke’s indictment that “you have to change your life” based solely on the fact of having seen, or read, or heard a work of art. In short, artworks are readily accessible, but experiencing them is altogether more elusive, a fact that prompts criticism in the often vain hope of sharing those experiences with others. A critical condition indeed.
Andreas

Over 10% of the Australian population suffer persistent pain. Manage your pain : Practical and positive ways of adapting to chronic pain uses a combination of approaches, which are the bases upon the well established and successful ADAPT program at the university of Sydney pain management and research centre at the Royal North Shore Hospital Sydney.

The book was very informative and I found chapter 10- Stretching and exercising to be very useful. Anne
Posted by Camden Council Library Service at Monday, June 13, 2016 No comments:

Tarantino’s pop culture fueled, non-linear, black comedy crime drama. Divided into several loosely interconnected vignettes, the film revels in the colour of L.A.’s dark underbelly. We have Jules Winnfield (Samuel L. Jackson) and Vincent Vega (John Travolta), two hitmen who are running an errand to retrieve a brief case for their boss, Marsellus Wallace (Ving Rhames). Marsellus in the meantime is discussing the fall boxer Butch (Bruce Willis) will be taking in an upcoming fight, as well as negotiating with Vincent to take his wife (Uma Thurman) out to dinner to curb her loneliness. Add in a couple of small time robbers (Tim Roth and Amanda Plummer), Vincent's dealer (Eric Stoltz), Jules’ friend who helps them in a tight situation (Tarantino), Marsellus’ "cleaner" (Harvey Keitel) and Christopher Walken as a Vietnam veteran bearing heirlooms, you have a film that celebrates its pulpy origins.


What distinguishes Tarantino is both his eye for phenomenal set pieces as well as his ear for highly entraining dialogue in all his films. It may seem trivial, spurred by the everyday, the mundane, but therein lays its value, and never more than in Pulp Fiction. The entire film can be viewed as a mediation on meaning and value.  From the petty importance of a gold watch versus the mysterious contents of a briefcase, to a pastiche Bible passage, to the significance of what the French call a Quarter-pounder with Cheese to only be told that in America names don’t mean anything. The dialogue creates an ironic cycle where things that mean nothing are given vital importance by the interlocutors, only to be relegated as meaningless by the fluidity of language, yet which in turn creates meaning for the audience, who then ponder the meaning of any of it.

An engrossing and richly vital film, Tarantino’s Pulp Fiction proves its place as one of cinema’s finest achievements, with flawless writing, perfectly executed pacing, and its colorful yet relatable characters, all of which gives it sensational rewatch value.
Andreas

20-30% of the Australian population have a problem sleeping according to The complete guide to a good night's sleep. The book discusses the latest research on-

The book is a great guide to help you create and implement a plan to sleep peacefully at night. Anne
Posted by Camden Council Library Service at Monday, June 06, 2016 No comments:

This month the Movie Club will be screening The Bridge on the River Kwai, directed by David Lean and starring Alec Guinness, Sessue Hayakawa and William Holden.


The story is set in a Japanese P.O.W. camp where a new band of British troops, led by Colonel Nicholson (Guinness), are instructed to help build a bridge as part of the Burma Railway that aids the Japanese war effort. Saito (Hayakawa), the commandant, instructs that all prisoners, officers and enlisted, will perform the manual labour in the construction of the bridge. As he says, "for it is they [the officers] who betray you [the enlisted] by surrender. Your shame is their dishonour." This aggrieves Nicholson, who maintains that the Geneva Convention prohibits officers from being forced to undertake such duties. This leads Saito and Nicholson to numerous confrontations, with Saito questioning Nicholson's honour and Nicholson attempting to maintain his pride and the order of his troops. 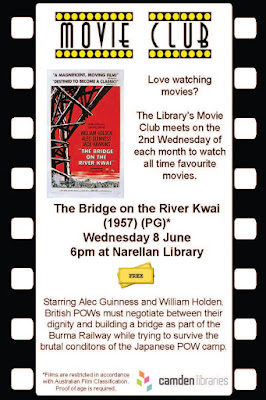 The film went on to win numerous awards, including the Oscar for Best Picture, Best Director for Lean, Best Actor for Guinness, Best Music, Best Adapated Screenplay (from a novel by Pierre Boulle who also wrote The Planet of the Apes), Best Film Editing and Best Cinematography. (Hayakawa was nominated for, but did not win, Best Supporting Actor) The film has subsequently gone on to have a following with many elements becoming part of popular culture, most notably the Colonel Bogey March. With its discussion of honour, pride, cowardice and madness, the film has become a unique war film, one "that focuses not on larger rights and wrongs but on individuals", and where by the end "we are less interested in who wins than in how individual characters will behave.” (Ebert, [April 18, 1999], The Bridge on the River Kwai [Review]).

The film will be screened on Wednesday 8 June at 6pm at Narellan Library, Corner of Queen and Elyard Street, Narellan. Tea, coffee, and biscuits provided, but BYO snacks are more than welcome. Stay after the screening to share your thoughts about the film and join in a discussion about the many classic moments and intriguing insights the film explores.
Posted by Camden Council Library Service at Friday, June 03, 2016 No comments: