Book Review - The Happy Couple- How to make happiness a habit one little loving thing at a time By Barton Goldsmith PHD ; forward by Harville Hendrix, PHD

The Happy Couple offers simple strategies for developing and strengthening the positive relationship traits of-
-gratitude
-humor
-honesty
'The Happy Couple is a guide book to relationships that every couple should read.' Bernie Siegel, MD author of A Book of Miracles and The Art of Healing.

With exercises at the end of most chapters the book is lighthearted, entertaining and positive. In the conclusion there is an interesting top ten list of ways to improve your relationship habits, which seems very achievable to implement into daily life.
An enjoyable and positive read. Anne
Posted by Camden Council Library Service at Monday, December 28, 2015 No comments:

In the 1970s the world become disillusioned with rock and reggae became the new counter culture with Bob Marley as guru. As a sign of this prominence, The Singer organises the Smile Jamaica concert. Although an event that would resonate with the world at large, it was designed to help bring peace to the trouble island facing political corruption and gang violence. Told through the eyes of gang members, politicians, CIA operatives, abandoned women, and journalists, the full panorama of the tumultuous times comes to bear, with the ramifications having bearings into the following decades. 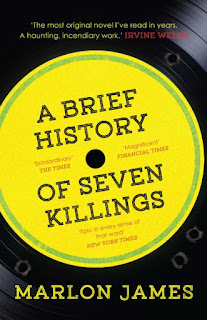 James’ tome owes a great deal to the multitudes of voices that fill its pages, whether it’s the Jamaican jive of Papa-lo or the domestic tinged machinations of Diflorio or the sanctimonious droning of journalist Alex Pierce. Like Faulkner, these numerous voices give us a unique vernacular on the unfolding events. Where it does stumble a little is that unlike Faulkner these shifts in voice do not always amount to a shift in perspective, rendering them repetition without reconstruction. Where it does come to bear is with its central subject. Of all the voices, the one that is never heard is The Singer. He is already a spirit in his own time, a myth being created as the actions unfold, and becomes the source of all hope, assurance, despair, and paranoia of all those in Jamaica. He becomes the symbol, the solution, the sage, the suspect, the sin, the song that all these cacophonous voices sing about.

Rich, alluring, and gritty, A Brief History of Seven Killings is a vibrant, multidimensional tale that divulges the personal within the monumental.
Andreas
Posted by Camden Council Library Service at Friday, December 25, 2015 No comments:

The Heat stars Sandra Bullock and Melissa McCarthy. From the director of the Bridesmaids. This odd couple joins forces to bring down a ruthless drug lord.

At the start they couldn't be more different but through their amusing and dangerous escapades they become true buddies. Filled with laughter and action, a great movie. Anne
MA15+ Strong course language, crude humor and violance
Posted by Camden Council Library Service at Monday, December 21, 2015 No comments:


By day Kumiko (Rinko Kikuchi) works a menial administrative job. Her mother is over bearing, wanting her to move back home until she finds a man and has children, and constantly questions her about promotions. At work, her colleagues are all younger than her with perfect figures and bright carers ahead of them, and her former school mates are living the life her mother dreams for her. But by night Kumiko obsessively studies an old scratched video cassette of Fargo, wanting to pinpoint the exact place where Carl Showalter (Steve Buscemi) buried the briefcase of money. One day, after having enough of her oppressive life, Kumiko goes on an all or nothing trip to Minnesota to hunt for her treasure.


The links with Fargo are plentiful. From the amped up personalities of the characters to the bleak white of the Minnesota snow. The other worldly Minnesota gives the second half of the film a dream like quality in comparison to the stifling, tinted Japan. The cinematography alone tells the story, shifting from Kuniko’s dingy home life to the expanse of the wilderness until she becomes a lone ghoul searching the forest until her final, blisteringly white triumph. The interplay with Fargo, a film where the intersection of dreams has fatal results, is appropriately at the heart of Kumiko’s obsession and quest. The treasure, the fictional prize that for Kumiko must, at all cost, be real and found, becomes an object worth risking everything for, and in the end, it is only by sacrificing her all that the dream has any chance of coming true.

Disparaging and beautiful, Kumiko, The Treasure Hunter reveals the treasure of dreams and the dangers of following them.
Andreas

Last Vegas stars Michael Douglas, Robert De Niro, Morgan Freeman and Kevin Kline. Billy, Paddy, Archie and Sam are all childhood friends. When Billy decides to get married to his 30 something girlfriend the gang gets back together.

They head to Las Vegas to throw a bachelor party for their last remaining single pal. This film is filled with laughs. Anne
Posted by Camden Council Library Service at Monday, December 14, 2015 No comments:


We all know someone like Ove. He’s the neighbour who tells you how to correctly mow the lawn, the uncle who always knows what’s wrong with the economy, or the man on the bus who will tell you why smartphones are nothing more than electronic humbug. Ove wakes early every morning before doing a neighbourhood inspection to make sure all is well and everyone is following the rules. He then has coffee with his wife, Sonja, and does a solid days work. Or at least, he used to. With Sonja dead for six months, Ove is placed in early retirement by the company where he worked for 30 years. Rather than face his days doing nothing at home he decides to end his life and join his wife. But with each attempt he comes face to face with the incompetence of the modern world, and each time he must delay his plan in order to set things right. 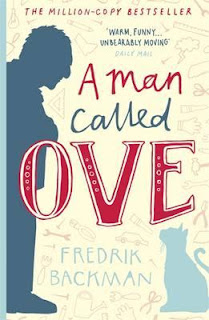 With hilarious observations of contemporary life, Backman shifts through all the assumed goods of the modern world, from tech professionals, to jogging, and the nonsensical T&Cs that accompany over consumerism, all with colourful, cantankerous jibes. But where this novel works is not in its observations or in its adeptness at highlighting the curmudgeon in our own lives (or in ourselves). Instead it is in its creation of sympathy for Ove. We come to see that his “rules are rules” mentality is not out of spite for other people, but a frustrated response to a world that only ever regarded him as someone who should just follow the rules, despite his attempts to live a life of principles that no one else seems to value.

A Man Called Ove is a hilarious, touching and compassionate portrait of those that modern life leaves behind.

Fifty Shades of Grey stars Dakota Johnson, Jamie Dornan. Ana is an inexperienced college student who is filling in for a friend interviewing billionaire and charismatic Christian Grey.

Quickly business turns to pleasure and Ana is swept up in Christian's glamorous lifestyle. Ana learns she needs to protect herself from Christian as she uncovers his darker side and secrets. At the same time she is drawn closer to unlock her own dark desires.
An all-consuming romance, how far will Ana go for love?
Anne
MA15+ Strong sex scenes, sexual themes and nudity.
Posted by Camden Council Library Service at Monday, December 07, 2015 No comments:


Following the success of Breaking Bad, creator Vince Gilligan created this spin-off/prequel. Focusing on Saul Goodman, Walter White’s shady ‘criminal’ lawyer, the series shows him from his origins as Jimmy McGill, known as ‘Slipping Jimmy’, a two-bit hustler from Illinois, and his attempts to become a prominent lawyer in Albuquerque, New Mexico, following in his brothers much regarded footsteps. The process, Jimmy finds, is not easy, and involves him utilising many of the skills of his past in order to carve out his future.


Like its predecessor, it features a mix of relatable yet unusual characters in escalating scenarios. It also has a more consistent quality than Breaking Bad, with each episode having a solid plot while being heavily interconnected to the overall story arch. Jimmy is also a more charming character. Where Walter White’s musing shifted between the melancholic and triumphant with manipulative intent, Jimmy provides a smooth, enjoyable rhapsody. You know he’s playing you, but with a tune this enjoyable why stop dancing? Comparisons will continue to be made with its parental series, but Better Call Saul is best thought of as a companion piece. Where Breaking Bad focused on change, on Walter’s complete transformation from “Mr Chips to Scarface”, as Gilligan described it, Better Call Saul focuses more on stasis, on the inability to escape ones past and completely transform oneself. Jimmy quickly realizes that his future is not reliving his ‘Slipping Jimmy’ days nor in becoming a pillar of the legal community like his brother, but an evolution into something altogether unique.


When I started reading ‘Trust Your Melody’, I felt as though I was riding the roller coaster with Lana - I cried when she cried, I swelled with pride every moment she did and shed a tear when Thomas was born safely after a horrendous pregnancy.

There is so much emotion in Lana’s words which I recognise from my own story, that I just know how helpful this book would be to other mums. Reading about her struggles with breastfeeding was like re-living my own journey as a new mum with no how-to handbook. I only wish I had this book when I was a new mum! 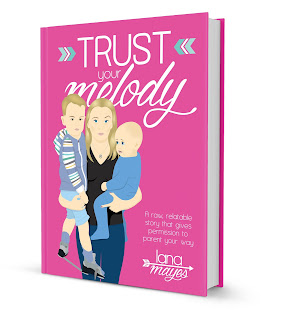 As mums we put so much pressure on ourselves. That is particularly why I love the messages at the end of each chapter. They're a wonderful reminder that we need to pat ourselves on the back a little more often!
Lana is an amazing writer and her book is full of heart which is probably why I can't put it down. I wanted to congratulate Lana - your story is powerful and I truly wish you every success. I know that other readers will feel as uplifted as I did afterwards.

I can't wait to read the next instalment in what has been an incredible journey so far.