These two books overdo the cuteness factor for me but there is plenty to choose from if you are seeking a new project. I personally would go for some of the other knitting and crochet designs available in the craft collections at each library.
Wendy

Book Review - The Disciple by Hjorth and Rosenfeldt

The second of the Sebastian Bergman Chronicles lives up to the promise of the first one. These two authors have written for TV and have a capacity to raise the levels of tension as the investigative team try to find connections between the four victims of a serial killer. Sebastian, the discredited psychologist and crime profiler begs to get back onto the case and then discovers that he is the link. The working relationship within the murder team is well handled and the reveal of information is paced well.  Just when they think they have solved the mystery, one of their team is taken by an escapee from a secure detention facility.  Then it's a race to discover where and rescue them before it's too late. This is very well done!
Wendy
Posted by Camden Council Library Service at Thursday, January 29, 2015 No comments:

If I were to cut, he thought, holding his wrists out, looking at his wrists, the blood would no longer gush from me but seep, and after a little while of seeping dry and heal. I am becoming smaller and harder and drier every day. 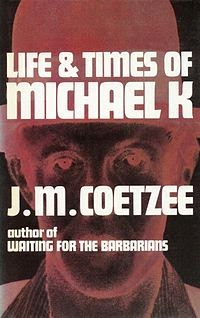 Michael K, a municipal gardener born with a hare lip and slow of mind, lives in a future South Africa in the atrophy of civil war. His mother, Anna K, is in failing health and longs to see the farm of her childhood again. K decides to cross the hundreds of kilometres to get her there. Facing bureaucratic procedure after bureaucratic indifference, they travel by wheelbarrow-cum-rickshaw. Anna K dies early into the journey, leaving K with an uncertain future, searching for solitude and a garden.
The language is restrained, precisely clear, but by no means plain. Coetzee conjures unsettling images that culminate in rich metaphors through this reserved prose. His ability to combine these striking climaxes while retaining unadorned, nuanced language (as in the passage above) is reason enough to read the book.  But the unambitious K provides an even greater one. He is not the daft, unimaginative dullard the world believes him to be, with the solace of his silence leaving his mad world (and us) devastated and baffled in his wake.
Andreas.
Posted by Camden Council Library Service at Wednesday, January 28, 2015 No comments:

Newlywed Jane Forrester, fresh out of college with a degree gets a job very easily with a soclal work department dealing with a very poor area in North Carolina. After a while she finds out why it was easy to get a job in such a depressed area. It is 1960. Her husband does not want her to work as he feels it reflects badly on him and takes away from her fitting in to the country club set.  She encounters such grinding poverty that it takes her a long time to understand what choices or lack of them some of her clients have. Against all advice, she gets too close to some of them and is then caught in the middle of an unfolding tragedy.  Beautifully written.
Wendy
Posted by Camden Council Library Service at Tuesday, January 27, 2015 No comments:

M. C. Beaton also writes the Hamish MacBeth series and I wish she would write more of those and less of these because Agatha Raisin is very irritating. The mysteries are good old fashioned cosy mysteries and a good enough diversion if you can deal with Agatha's deplorable love life, petty jealousies and eccentric inner circle. In spite of this I read all of them so she must be doing something right!
Wendy
Posted by Camden Council Library Service at Sunday, January 25, 2015 No comments:

Hank Cooper is a wanderer and has lived the last few years since he left the Army on the move. One of the few ex=Army buddies he has sporadically kept in touch with has died and Cooper comes to Thunder Point to honour his memory and touch base with his last moments. Staying to sort out the property he has inherited from his friend, Cooper meets the townsfolk and finds that Thunder Point might be a hard place to move on from. Elements of mystery, teenage growing up and romance add to a feel good story that is good light entertainment. Cup of tea, a piece of cake, put your feet up and visit Thunder Point.
Wendy
Posted by Camden Council Library Service at Saturday, January 24, 2015 No comments:

Book Review - The Edge of Nowhere by Elizabeth George

Elizabeth George writes the very densely involved Inspector Lynley mystery series and has always seemed so quintessentially English it is a shock to find out she lives in America and has set this YA fiction in her home town on Whidby Island, Washington State.  This is a lighter offering but one that is engrossing and uses her penetrating depictions of people.  Hannah has a gift for hearing other people's thoughts – she calls them whispers. She is unknowingly used by her stepfather to help him swindle people out of their money and when that is discovered, he threatens her life. She and her mother go on the run in different directions to throw him off their trail. With a new look and a new identity as Becca King, her safe haven evaporates as the person she was to stay with dies unexpectedly. Becca finds somewhere to stay and is starting to feel like she will be OK until her mother can come but then she gets caught up in local troubles. Learning how to survive and who she can trust, Becca is in for an eventful and dangerous few months. The young people she meets have their own maturing to do as they deal with family expectations and the normal teenage issues of fitting in and finding out who they are. Elizabeth George uses the natural terrain of forest, hill and coast to maximum advantage and this is every bit as good as her adult fiction.
Wendy

Book Review - He who Kills the Dragon by Leif G. W. Persson

Detective Superintendent Evert Bäckström is the weirdest detective I have ever read about. He is prejudiced and seemingly quite lacking in intelligence. He is prejudiced against just about all of his colleagues and is duck shoved from position to position as his superiors try to ignore the fact that he has an annoying capacity to solve cases. He has never heard of political correctness, is lazy, bigoted and just a bit corrupt. This is however, a funny and complex mystery, a page turner as you cannot believe how he goes about life. I don't think I want to meet him, but I enjoyed very much reading his story. Another good find!
Wendy

This is the 14th of the Number 1 Ladies Detective Agency novels and is well up to standard. It helps if you have read the earlier ones but it is not necessary to engage with McCall Smith's gentle observational style. Traditional Botswana manners rely on goodwill, kindness and respect, qualities sadly lacking in some areas of modern society. The Number 1 Lady Detective, Mma Precious Ramotswe, is dealing with change as her able Associate Detective Mma Makutsi goes on maternity leave. After the new baby arrives, how will Mma Makutsi deal with her husband's unpleasant aunt insisting on the traditional seclusion of the birth mother, when she is keen to get back to work?  Rra J.L.B. Matekoni learns how to be a modern husband and Precious solves two tricky cases involving a will dispute and a smear campaign against the Minor Adjustment Beauty Salon.  Superb.
Wendy

Cassie Smith has been out of work and depressed until she gets the idea to start a business helping people get their Christmas together. Dressing trees, organizing presents and parties takes over her life. Helped by her steady & loving husband Joe, she is a raging success but then arrives at a crossroads, a decision about her future that may or may not still include Joe. Entertaining fantasy romance complete with snow and a visit to Santa's House in Lappland!
Wendy
Posted by Camden Council Library Service at Saturday, January 17, 2015 No comments: