The abolitionist John Brown is terrorising the Southern states with tales of his exploits reaching boogeyman proportions. One day he wanders into Dutch Henry’s tavern and meets Henry Shackleford and his Pa. After a botched liberation he takes Henry into his army, although believing him a girl and calling him “Little Onion”. Henry witnesses Brown’s life and exploits as well as the social turmoil Kansas experiences at the idea of liberating slaves in the lead up to the Civil War. 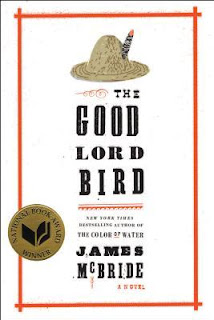 The child narrator features prominently in the Southern literature from Mark Twain to Harper Lee. McBride adopts a similar position, but in his tale the ridiculous elements are heightened. Although this adds playfulness and wit to the tale, it does not shy away from more troubling elements, like the hanging of several slaves believed to be planning an insurrection, and Henry is far from the wide eye innocent child of earlier works dealing with slavery or race relations. He knows the vile habits and the treachery of the whites, as well as how to play the game of the ‘good negro’ in order to survive. Henry being mistaken for a girl and his willingness to don a dress and play that role divulges the spuriousness of this world. The more ridiculous and hyperbolic elements reflect the absurdity of the social structure of the South but without it becoming fanciful or otherworldly. It is simply the reality, the strange, twisted, paranoid reality that provided the institution of slavery with its constancy.

A modernisation of the slave narrative, The Good Lord Bird removes all innocence while revealing the farcicality of reality.
Andreas