In a time after the Romans and when the knights of Arthur still live, England is in a time of despair. Ogres are constant nuisances and dragons occasional perils. But worst of all is a mist that has gathered over the moors and valleys, and everyone is caught in a state of amnesia. Axl and Beatrice, an elderly couple, start to ponder this strange state that has befallen them and their fellows, and decide to go and see their son, who is also a vague memory. Along their journey they meet many dwellers in this cursed land, each with their own affliction and hope to be freed of the mist. 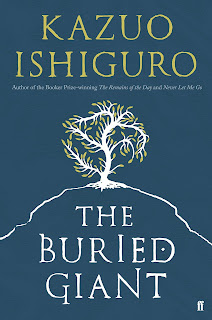 The novel provides many allusions to epic tales and literatures that creates a dense atmosphere. From the despair created by the psychopomp who is in turn tormented by the neglected wife of a passenger, to the heroic warrior with echoes of Beowulf, the conniving monks and treacherous kings, and the legend of Arthur hovering over everyone’s lips. The first few chapters of the novel promise a surreal take on the fantasy genre, with strange omens and eerie sensations. But as the chapters progress these hypnotic passages blend into staples of the fantasy genre, with quests and burdens that need to be fulfilled. There remains a subversive allure, where Arthur’s knight is weary, and the heroic warrior is as motivated by personal grudges as heroic duty, but often these seem more contrived to toil in the genre, and many passages and narrative shifts have little place other than convenience.

But Ishiguro's ability to move from heart-warming elation to devastation is perfect for the search for memories at the heart of The Buried Giant, with memories having both the power to relive past ecstasies but also to inflict regret and lamentations.
Andreas