This month the Movie Club will be screening one of the most celebrated and talked about films of all time: Orson Welles' Citizen Kane.

Released in 1941, the film was Welles' cinematic debut. It follows a newspaper reporter who attempts to find the meaning of 'Rosebud': the dying words of media tycoon Charles Foster Kane. In his search he consults Kane's former business manager, the diary of his deceased guardian, his second wife, and his oldest friend turned critic. Each tells of a different aspect of the larger than life Kane, but did any of them actually know him, or the identity and significance of Rosebud?


The film is celebrated for many reasons. In a time when Hollywood was driven by genre (like Film Noir, Musicals, and Westerns) and films were at the mercy of studios, writers, directors, actors and producers all having an individual impact on the final product, Welles' monument combined many genres as well as seeing the 25 year old Welles taking on all roles in the making of the film, one of the earliest and most megalomaniacal examples of auteurship. 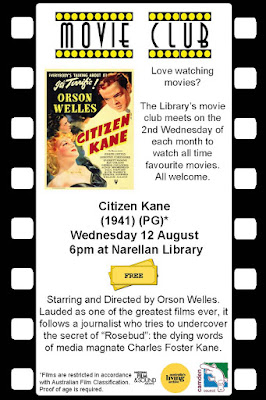 From its non-linear, ever complicating narrative (reminiscent of early twentieth century novels like F. Scott Fitzgerald's The Great Gatsby and William Faulkner's As I Lay Dying and Absalom, Absalom!) to its superior framing and revolutionary cinematography, the film is certainly a milestone but also a rarity of the American film industry.

The screening will be held on Wednesday 12 August at Narellan Library. Not convinced of its greatness? Share your thoughts or use the discussion questions to get a debate going after the screening.