Book Review—The People in the Trees by Hanya Yanagihara


Norton Perina is a renowned immunologist and winner of the Nobel Prize in Medicine. His fame is owed, quite simply, to unlocking the key to immortality. This comes courtesy of a rare turtle, found only on the Micronesian island of Ivu’ivu, where those who manage to reach 60 are given eternal life by consuming the turtle. But this gift has its cost, as those chosen few eventually become The Dreamers, doomed to senility and eternally wondering the island of ever fading memories. After fame, Perina adopts many children from the island. The problem however is that he is a paedophile, and this his account of his rise and downfall. 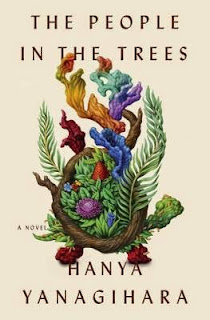 The novel owes a debt to Nabokov, first in its academic paedophile protagonist and secondly in its style being his self-indulgent confessions. Perina is nowhere near as veil a creature as Humbert, and also lacks some of his deviant charm. But his story is perhaps more fascinating, as well as more troubling tragic. The superficial semblance to Lolita is clear, with Perina even having Nabokovian pastimes (note his desire to collect insects rather than participate in his studies), but there is also the overpowering influence of memory. The whole work is Perina’s attempts to look back on his life from the confines of prison, ever deeper into the mirrorlike “sea of time” yet unable to reconnect with the life now past, just like The Dreamers he found on Ivu’ivu so many years before.

Tragic and worrying, The People in the Trees is a richly told and engrossing narrative.