Raised first as a bird and then as a feral child, Zal Hendricks now lives in pre-9/11 New York. He struggles to be as ‘normal’ as possible all the while nurturing a longing to do what for him is as instinctive as breathing: flying. In his quest he comes across Silber, a famed illusionist, and Asiya, an artist who photographs birds in various levels of decay to give them new life. The lives of the three intermingle, with each searching for transcendence. But with the most reality shocking event in New York’s history slowly creeping closer, how do these special creatures hope to achieve fulfillment? 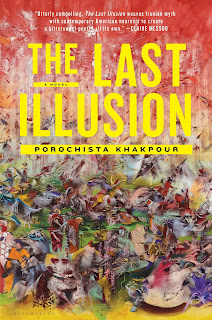 Khakpour combines the decade defining event with a mix of Persian Epic, Islamic mysticism, and illusionist ostentation. At times the narrative becomes a little too caught up in its own twining with laboured and self-conscious prose, as with the opening line “Exactly once upon a time”. The idiosyncratic characters generate considerable interest while the reality of life becomes ever more alien and impenetrable until the expected climax. But unlike Laguna’s The Eye of the Sheep, the strangeness does not reinforce the harshness and poignancy of reality, and the epic proportions cover rather than embody humanity.

The Last Illusion’s ambitious telling provides a distinctive yet otherworldly addition to the 9/11 genre.
Andreas