“Blue Is The Warmest Color” is a graphic novel that follows the protagonist, Clementine, as she moves through the motions of growing up, while trying to make sense of her infatuation with Emma: the girl with blue hair. Throughout the story Clem challenges the idea of her own identity, family and friendships.

“Blue Is The Warmest Color” is a great entry point into the graphic novel genre. The text is structured around diary entries which act like traditional chapter breaks, which makes it easy to read. The written text is fast-paced, while the images offer a tender unfolding of Clem’s life. All of this contributes to a story that is exhilarating and emotive.
*This graphic novel contains explicit content and is intended for an adult audience.
Posted by Camden Council Library Service at Monday, December 19, 2016 No comments:

Book Review - Women in Workboots : Inspirational stories of women who have broken through the barriers in male dominated industries By Lynette Gray

This book contains some great tips and secrets from women who have succeeded in male dominated careers. Author, entrepreneur and business leader, Lynette Gray has created Women in Workboots  for women to have more of a voice in these industries, her aim is to inspire, encourage and educate women.

Some of her tips include-
The book contains 13 chapters and it is filled with great inspirational stories, my favourite being about Eleni Mitakos, chapter 5 the 2013 Telstra Business Women's Awards Nominee. Anne
Posted by Camden Council Library Service at Wednesday, December 14, 2016 No comments:

This month the Movie Club will be screening It's a Wonderful Life, starring James Stewart and Lionel Barrymore, and directed by Frank Capra.

George Bailey (Stewart) is a good sort. He saved his kid brother drowning, he stopped a depressed druggist from accidentally poisoning someone, and he gave up his dreams to continue his father's savings and loan business to stop the old Scrooge-like Henry F. Potter (Barrymore), from gaining a complete monopoly of the town. But George is at a crisis, and contemplates ending it all one Christmas Eve, until Clarence, an unlikely guardian angel, shows him what the world would be like without him, and the vision is more hellish than he could possible imagine.


The film is one of many sentimental dramas by Capra, but it is perhaps the most complete. The film itself has gone on to become the quintessential Christmas movie despite the fact that Capra himself never wanted the film pigeonholed as a "Christmas picture" and instead wanted it to celebrate the lives and dreams of ordinary American citizens. It has nonetheless had a long life after its initial release with countless TV reruns and DVD/bluray purchases. The film itself is well directed, perfectly cast with Jimmy Stewart's "awshucks" good fella routine serving him well and Lionel Barrymore clearly having a great deal of fun as the miserly Potter.

The film will be screened on Wednesday 14 December at 6pm at Narellan Library, Corner of Queen and Elyard Street, Narellan. Tea, coffee, and biscuits provided, but BYO snacks are more than welcome. Stay after the screening to share your thoughts about the film and join in a discussion about the many wonderful moments in the film.
Posted by Camden Council Library Service at Sunday, December 11, 2016 No comments:

Book Review - Cognitive Behaviour Therapy : Your route out of pertectionism, self sabotage and other everyday habits with CBT By Avy Joseph

CBT is recognised as one of the most leading, evidence-based talking therapies. It places alot of emphasis on currently held beliefs, painful emotions and problematic behaviours that can effect us getting a fuller experience of life. In this book you will be shown how to use CBT to set yourself up for success and overcome those beliefs and habits that sabotage your life.

'People are not disturbed by events but by the view they hold about them' Epictetus, Stoic philosopher AD 75.
Containing exercises, examples and tips throughout, you will be confident to practise CBT techniques in a number of different situations.
This updated second addition is written by professional CBT practitioner Avy Joseph, the book is aimed to help you reach your goals and maintain a positive outlook no matter what life throws at you. The book is well set out and easy to read, I really enjoyed chapter 3-Setting your goals. Anne
Posted by Camden Council Library Service at Wednesday, December 07, 2016 No comments:

Jenny Strebe a professional hairstlylist and educational director has more than 15 years experience working between Los Angles and NZ. 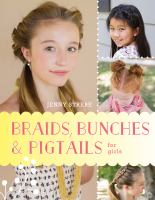 Away from the spotlight Jenny is a mum of two and decided to create Braids, Bunches and Pigtails for girls that gives step by step instructions and lovely illustrations demonstrating over 50 different hair styles, with a style to suit every occasion. " There's never a bad hair day with this book by your side." Anne
Posted by Camden Council Library Service at Friday, December 02, 2016 No comments: