This month the Movie Club will be screening Casablanca, starring Humphrey Bogart, Ingrid Bergman, and Paul Henreid, and directed by Michael Curtiz. Based on the play Everybody Comes to Rick's, a thinly veiled cry for America to become involved in World War II in opposition to the isolationist policies prevelant at the time. The film was green-lighted shortly after the bombing of Pearl Harbour and released the following year, with many rewrites to the original script.

Casablanca, in 'Unoccupied' Morocco, has become a haven for many trying to flee the ever encroaching terror of Nazism in Europe. The centre of night life is Rick's Cafe Americain, run by Rick Baline, a American expatriate with a tumultuous past. Despite the suffering and longing surrounding him, Rick prefers to avoid entanglements and proudly claims that he sticks his "neck out for nobody". All this changes one night when Ilse, the woman he loved in Paris years before, comes to town with her husband, the Resistance leader Victor Laszlo. Rick must choose whether to place his emotional turmoil aside and help Ilse and Victor escape the clutches of the local Nazi officer, Major Strasser, or to turn his back on the woman he loves. 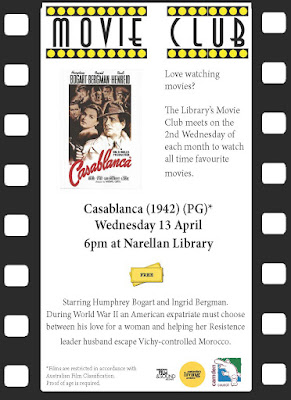 The film was just another movie when it was made, as "no one making 'Casablanca' thought they were making a great movie." (Ebert, R. [September 15, 1996] “Casablanca [Review]”) But as time has passed the film has gathered new generations of viewers, with its quotable dialogue (some of the most quoted and certainly the most misquoted line in film), but also for its great use of lighting, cinematography, and the pitch-perfect casting.

The film will be screened on Wednesday 13 April at 6pm at Narellan Library, Corner of Queen and Elyard Street, Narellan. Tea, coffee, and biscuits provided, but BYO snacks are more than welcome. Stay after the screening to share your thoughts about the film and join in a discussion about the films many classic and affecting scenes.