Benjamin and his three older brothers go fishing in the nearby river in Akure, the town where they live. Ordinarily Omi-Ala, the river where they have gone fishing, is off limits, believed to be cursed. But they have the freedom to go there each day after school thanks to their father having moved to a faraway city for work, leaving only their mother to care for them. But one day the boys encounter Abulu, the village madman who wonders around naked and has garnered a reputation for fatal predictions. His words strike Ikenna, the eldest brother, who is told that he will be killed by a fisherman, one of his brothers. This causes a rift in the family, with Ikenna wanting to distance himself from all of his family, with his health, faith, and mind slowly succumbing to the horrid madness and his family all becoming victims to the madman’s words. 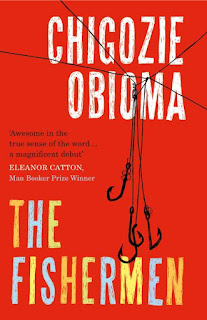 Told by the adult Benjamin as recollections from his childhood, we gain a sense both of the fruitful potential and as well as the squandered promises, with the lives of the family mirroring the political disintegration of Nigeria after the annulled 1993 M.K.O. Abiola election. Where there should be hope and progress there is instead turmoil, squabbling, and biblical struggles between brothers, African superstition in evil places, and curses that invade these promises and send those involved into a cycle of madness and death. Nothing is secure, nothing is innocuous, in this country where words, like locusts, can transform “from harbingers of good things into the heralds of evil”.

The Fisherman is a striking debut of the turmoil of a family and the sorrow of a nation.
Andreas