A young girl, Lucie Jurin, is found wondering around an abandoned industrial estate. Her body shows signs of malnutrition and physical abuse and police discover that she has been held captive and ritually abused, but her captors and their motives are never discerned. Lucie spends the next 15 years trying to adjust to the outside world and to make sense of her ordeal while being haunted by a ghoulish creature. She eventually tracts down those who held her captive and exacts her revenge, much to the shock of Anna Assaoui, her one friend who has been trying to help her. Anna tries to cover up Lucie's actions, but in the process discovers more about Lucie's captors and the horror that will soon be unleashed upon her. 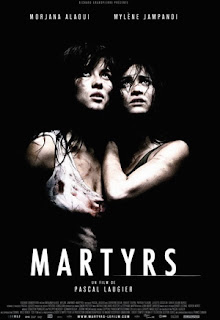 The film is certainly brutal, and its ending, with its ambiguous nihilism, does not ease its impact, and for many this will immediately remove it from their viewing list. But the violence is not from some voyeuristic viciousness. It forms the heart of the narrative, where pain provides an avenue to something less profane and approaching the sacred, yet having an unbearable cost on the victim and those sanctioning the torture. What allows the film to achieve this is what is surprising of a film this brutal: its restraint. This is especially in the last act. Where cheaper films would see it as an opportunity to unleash a litany of sadistic rites of ever escalating severity, Martyrs establishes a routine of beatings and deprivations. It is testament to the much neglected role of repetition in art, seeing the violence become an ordeal and not a spectacle, to which the audience is forced to bear uncomfortable witness and share in the guilt of the tormentors.

Uncompromising yet executed with admirable restraint, Martyrs is not an indulgence in violence but a meditation on its consequences, both for the victims and the audience.
Andreas