In March the Movie Club will be screening the much celebrated The Shawshank Redemption. Based on a Stephen King novella (in fact, King lists it as one of his favourite adaptations of his work) and was directed by Frank Darabont (who also directed The Green Mile and The Mist, two other adaptions that King lists among his favourites). It star Tim Robbins and Morgan Freeman.


Wrongfully convicted banker Andy Dufresne (Tim Robbins) is sent to Shawshank State Penitentiary to serve two life sentences for the murder of his wife and her lover. Despite the injustice of the situation, Andy realises the futility of pleading his case once within the walls, and attempts to make the most of this unavoidable situation. While in prison he meets Red (Morgan Freeman), one of the prison's contraband smugglers, who ponders Dufresne's unusual personality. Dufresne puts his talents as a banker to good use, and becomes Warden Norton's (Bob Gunton) money launderer. This has many benefits for the prison community, as Dufresne's favour with the warden and the guards allows him to rebuild the prison library. Little know to all, although stoically accepting his changing life in the prison, Andy harbours an unquenchable hope for his freedom, and makes efforts to see himself living a new, tranquil life beyond the prison walls. 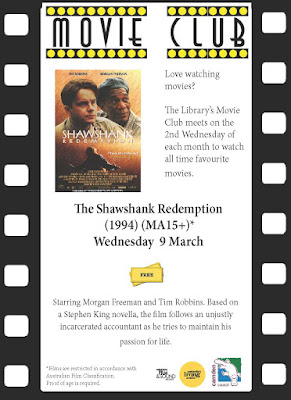 The film did not perform well at the box office, but has subsequently become highly regarded. It currently holds a 91% "Fresh" Rating on Rotten Tomatoes, and in 2015 the United States Library of Congress selected the film for preservation in the National Film Registry, finding it "culturally, historically, or aesthetically significant". But the film has also become extremely popular with audiences who connect with its main characters and the triumph of hope and freedom over a crippling and unjust position.

The film will be screened on Wednesday 9 March at 6pm at Narellan Library, Corner of Queen and Elyard Street, Narellan. Tea, coffee, and biscuits provided, but BYO snacks are more than welcome. Stay after the screening to share your thoughts about the film and join in a discussion about the films many powerful moments.
Posted by Camden Council Library Service at Friday, March 04, 2016