Giovanni Vivaldi is a very normal man. After leaving his parent's destitute farm and doing his military service he started working at The Ministry in Rome, where he has worked for thirty years and has become a mid-level bureaucrat. His plan is to soon retire and fix up a dilapidated shack in the countryside with his snarky wife, Amalia. But before that can be done he must complete his life’s achievement: helping his son Mario, a newly qualified accountant, to get a job at The Ministry, so that he along with his generation can lead to better things. But this is no simple matter. With 12,000 candidates applying for 2,000 positions and an oral and written exam to face, Giovanni must perform strange rites to secure his son’s future. But all his efforts prove pointless due to one man, and Giovanni dedicates his efforts to revenge. 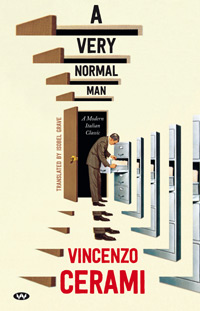 Giovanni is an odd character. He is the victim of circumstance but is more than willing to exploit this same master for his own ends when it suits him. This is aided by a society that mixes the detachment of bureaucracy with the ritual of faith and superstition: the files Giovanni must formulate day in and day out, to the church around the corner where Amalia replenishes her supply of holy water, to the extravagantly calculated yet mundanely received Freemasonry ceremony are all par for the course. The normality lies not with the man, but with his responses. Nothing is too bizarre, no act too incomprehensible, no loss too irreconcilable. All are simply the acts one must perform in life, and this is simply normal for a man.

As darkly hilarious as its conclusion is troubling, A Very Normal Man shows the peculiarities that disrupt the notion of a normal life.
Andreas