Travis Bickle (De Niro), an honourably discharged Marine, suffers from chronic insomnia. To help alleviate this he becomes a taxi driver, working the night shift, 12 hours a night, 6 nights a week. This doesn't help his insomnia, and his loneliness and depression become ever stronger. Added to this is the insight into how corrupt, sleazy, and dysfunctional New York City really is. All this leads Travis to desire to do something, to clean up the streets, to give his life meaning, leading to ever more deranged and self-aggrandising thoughts and actions. 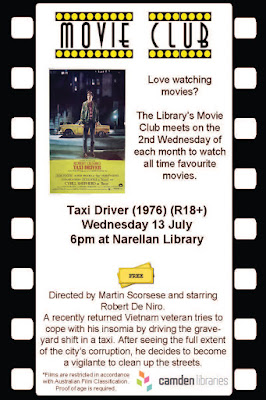 The film will be screened on Wednesday 13 July at 6pm at Narellan Library, Corner of Queen and Elyard Street, Narellan. Tea, coffee, and biscuits provided, but BYO snacks are more than welcome. Stay after the screening to share your thoughts about the film and join in a discussion about the many intriguing insights the film explores.