João III, the king of Portugal, has a dilemma: the wedding gift to his cousin, Maximillian of Austria, at the time of his nuptials seems insufficient. But a solution has been discovered in the form of Solomon the elephant. In the king’s possession for many years, it has hardly garnered the attention such a creature demands, and so sees it not only as an option to dispense with an overlooked royal asset but also to give a stunning gift. This means transporting the beast from Lisbon to Vienna. At each new location the elephant inspires the fascination of the locals, with all viewing the elephant as a different being of elation, concern, or utility. 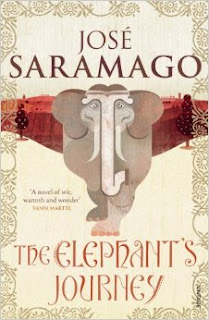 The use of an elephant is no coincidence. Although an elephant did indeed cross Europe in 1551, the aptness of the creature is more intertwined with the narrative that is less about the historical than the anecdotal. Wherever Solomon is seen he becomes the proverbial elephant in the room, those thoughts that hitherto words were incapable of giving form. Thus Solomon becomes a contingent object, being added to a family cress, or being prayed on to remove a curse, or an umbrella stand. But equally he becomes an object that, although now a source of fascination, will one day simply become a memory, something shared in a reminiscent glance with a fellow witness, or a colourful yarn regaled to strangers. Like Queen Catherine of Portugal who, when asking “whatever happened to Solomon?”, will feign innocence and manufacture amusement at being given news of his whereabouts. It is all a testimony to the fact that “memory, which isn’t anyone’s strong point, is best not overburdened with too much detail.”

The Elephant’s Journey is a rich, whimsical tale filled with humour, solemnity, and the truth of the circumstantial.
Andreas

Posted by Camden Council Library Service at Friday, May 06, 2016