Book Review—Grief is the Thing with Feathers by Max Porter


A widowed Ted Hughes scholar and his two boys try to cope with grief and are visited by Crow, the eponymous figure from Hughes’ Crow: From the Life and Songs of the Crow. Crow tells the father early on that “I will only stay as long as you need me”, and so beings a multi-voiced narrative, moving between Crow’s musings about the family and the pleasure he finds in grief and Dad and the Boys coming to grips with their grief and Crow in their lives. 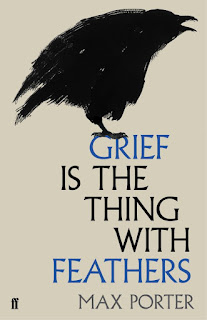 Grief reads much like a collection of poems within the frame narrative of a widower and his two boys. Much like grief it lacks coherence, moving between frenzied memories, the drudging inactivity of everyday life that slowly becomes the new normal, and the voices one adopts, sometimes little more than an inexplicable kraah, other times fanciful tales that mix memory and desire. Crow acts as therapist , trickster, substitute, scapegoat, and healer. As in Hughes’ work, it celebrates the uncertainties of the figure, taking sombre pleasure in his multitude of roles in different mythologies, all highly personalised in Grief, with Dad and the Boys coming to realize that this unfathomable figure in their lives is grief itself. There are no answers beyond that, because beyond its existence there is nothing certain about grief.

As alluring as it is distressing, Grief is the Thing with Feathers traverses the territory of sorrow without attempting to simplify its intricacies.