This month the Movie Club will be screening the film noir classic The Maltese Falcon. Based on the novel by Dashiell Hammett and directed by John Huston, the film stars Humphrey Bogart as private detective Sam Spade.

Spade and his partner Miles Archer are hired by Ruth Wonderly to find her sister who has fallen in with a bad crowd in San Francisco. On the first night Archer is murdered and it is revealed that Wonderly is not who she claimed to be and is in fact searching for a jewel encrusted falcon statuette of untold value. Through the search Spade comes across others who are also searching for the same statuette all the while trying to solve the mystery of his partner's murder. 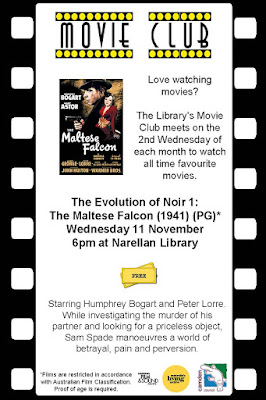 The film is notable not only as the first lead role and defining performance of Bogart (in addition to Hughes directorial debut and Sydney Greenstreet's film debut) but is arguably the first film noir and the defining detective film. Released the same year as Citizen Kane (which also added to the techniques of the genre) the film's subject matter and characters takes on a grittier, more real world tone. It established many of the characteristics of the genre, like the hard-boiled lead, femme fatale, moral ambiguity, as well as striking visual techniques, most notably the interplay of shadows.

The Maltese Falcon will be showing on Wednesday 11 November at Narellan Library (Cnr Queen and Elyard Street, Narellan) at 6pm. Tea, coffee, and biscuits provided, but you are more than welcome to bring your own snacks and beverages.

Stay after the screening to chat about the gritty ambiguities and stylistic achievements of The Maltese Falcon has to offer. Share your thoughts or use the discussion questions to get a debate going.