Edna Pontellier, wife of Laconce, a successful Creole businessman in New Orleans, has adjusted, over six years of marriage, to her new life and home. Accommodating the expectations of her husband and the upper society of New Orleans, she meets, while vacationing at a nearby Island, Robert Leburn, with whom she becomes infatuated. This young man sparks memories of her youthful infatuations, and she begins to unravel, socially and sexually. 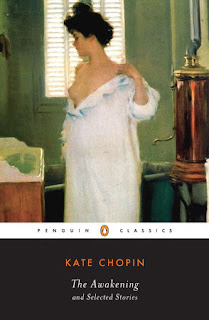 Chopin came to prominence as a local colourist author, presenting the variety of the South and Louisiana in the late 19th Century. Stories like "The 'Cadian Ball" and "Désirée’s Baby" are fine example of this tradition, with the latter highlighting the preoccupations with miscegenation. Other stories, such as "Emancipation: A Life Fable", "Story of an Hour" and The Awakening reveal a focus of Chopin for which she become noted for after her death: a growing consciousness of the restraint of women within society. It was her place as an outsider in this Creole New Orleans (originally from Missouri) that provided Chopin with the distance to observe the vibrance of middle class creole society and, like Edna in The Awakening, to see through the pretences and social fictions. What makes The Awakening unique is that although born out of this local Colour, intellectually it is at home in two literary traditions: the feminist writers of the 19th century, such as George Sand, and fin-de-siecle literature, best known in the English speaking world through Oscar Wilde and Aubrey Beardsley, with its preoccupations with degeneration but also of new beginnings and new hopes. The social and sexual critique comes not only from her unique position with her new home, but also in the richness of ideas that travelled from far off and helped make sense of these constraints within her fiction.

Deeply personal while at the same time socially relevant, The Awakening and Selected Stories provides unique insights into both the author’s and our society.
Andreas
Posted by Camden Council Library Service at Friday, November 27, 2015