This month’s Movie Club screening is The Searchers. One of 14 collaborations between John Wayne and John Ford, the film has gone on to gain critical acclaim, often considered one of the greatest westerns of all time.

Ethan Edwards is a Civil War veteran who fought on the side of the Confederacy. After returning to his brother’s home in Texas they are attacked by a Comanche raiding party. The only survivor is his niece who has been taken, and Edwards embarks on a five year long journey to save them. 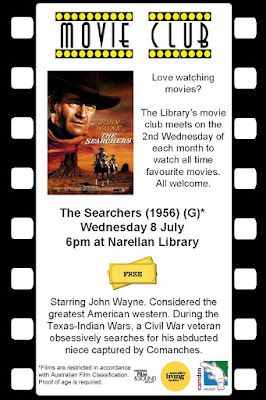 Edwards is obsessive, unrelenting, and flawed. The motives for his unending search are less to bring his niece back to civilisation than to remove her from the clutches of the Comaches, even if that means killing her. At the heart of the film is Ford’s look at the role of race in the development of the American West and the Western film genre to which he made significant contributions. This has led the film to gain a reputation as a revisionist Western. But the question remains if its actual intention came through or if it is simply another addition to a genre that is so based on and so enthralled in the conflict between white settlers and native Americans.

Either way it is a technically stunning piece of cinematography from a master director as well as having a lot going on in its reels. The screening will be Wednesday 8 July at 6pm at Narellan Library with a discussion about all the ideas and depictions afterwards. Share your thoughts or use the discussion questions to get a debate going.