A fascinating exploration of the differing threads of political influence in pre-WWI in Mesopotamia - modern Iraq; as the European powers jockey for position and influence and the Ottoman Empire crumbles. Somerville, an idealistic archaeologist is under pressure from all sides. An American geologist is surveying potential oilfields under pretence of being an archaeologist. Agents from Austria, Germany and Britain keep an uneasy eye on each other and the local Arabic peoples try to gain what advantage they can. Two women, a wife and a fiancee, offer both traditional and radical notions of contemporary feminity. A study of past upheavals in the area do not prepare Somerville for the present cataclysms. I particularly enjoyed the descriptions of the geological formations, the bitumen sands and other features which presaged oil being present and the somewhat naive idealism of the geologist who thinks that cheap and plentiful fuel will bring the world's people out of poverty by providing cheap power. Barry Unsworth explores his characters motivations with lyricism and understanding.
Wendy
Posted by Camden Council Library Service at Monday, July 20, 2009 No comments:

Book 3 in Simon Scarrow's epic story of Napoleon and Wellington is another absorbing story. You can feel the suffering of the troops as they march, counter march, deal with low rations and impatient generals. The generals have to deal with non-military imterference into what they know they can achieve. The characters of the two men are developing as they move towards their Waterloo. Napoleon is starting to give into his megalomania viewing all others as subordinate to his visions. Wellington had a much slower rise to much less power and was required to do much more with much fewer resources. The battles are detailed in vivid descriptions so that you can imagine being one of the great generals and trying to decide where and when to commit your last reserves.
Wendy
Posted by Camden Council Library Service at Monday, July 20, 2009 No comments:

who hasn't had doubts? 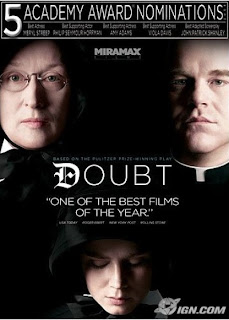 The DVD DOUBT has had critical acclaim for its uncompromising storyline and searingly honest portrayals of the main characters by some fine actors. Meryl Streep (Sister Aloysius) and Philip Seymour Hoffman (Father Flynn) shine in this movie, ably supported by Amy Adams as the idealistic nun slowly losing her innocence as she encounters the gritty realities of running a school. The movie is based on the Pulitzer Prize and Tony award wining play by John Patrick Shanley who also wrote and directed the movie. What is the relationship at the heart of the movie? Is the merciless headmistress or the affable priest the real supporter of the children? How does a mother best protect her son in the light of unreasonable constraints? The film raises questions rather then providing answers in an absorbing and complex exposition.
Wendy
Posted by Camden Council Library Service at Monday, July 20, 2009 No comments: