This resource can be found here. It is part of our online nonfiction collection of items that you have free access to with a library card. All you have to do is scroll down to the bottom of this page, and log in.

Remember that sentence work we started here? Well, we are going to break it down even more. A sentence is a full thought that contains the 'who' and 'what they did'. Sentences do this by dividing into a subject and a predicate.

Let’s start with subject. The subject in a sentence is a noun that names a person, place or thing. A noun can be a name like Bob; a word that defines an animal or object like cat, dingo or chair; a place like Blue Mountains, Hollywood or forest; a feeling like fear, happiness or anger; a quality like laughter, plumpness or strength; or even something more abstract like biology, holiday or friendship (abstract because these aren’t tangible [able to touch and see them] nouns).

That is so many different types and examples!

It can be very confusing understanding even that little list; so we will go into more detail of nouns in another post; but for now, this list is a good example for working through sentences.

The predicate in a sentence tells a reader what the subject (noun) does or is. This means a predicate is a verb. Before I give you examples of predicates: there are two kinds. There are the action verbs (also known as doing words) that show action; and there are linking verbs that show “what is or seems to be”. When thinking about these two types of verbs; action verbs are much more recognisable: running, flew, ducked, steaming. Linking verbs are harder to spot: is, are, seems, appears, was, must, should.

So, let’s have a look at some examples and hopefully clear this up even more.

Boy is the subject because it relates to a person and jumped is the verb because the person is doing something; e.g. jumping.

The cat sat on the mat.

This is a sentence everyone hears about. In this short sentence the subject, or noun, is cat. Sat is the verb because the cat has done something; it has performed an action. Mat is also a noun, but because it follows the verb (remember verbs are doing words) and so is receiving action, not doing or completing an action, it becomes an object within the sentence.

The chair is in the kitchen.

In this short sentence the subject, or noun, is chair. Is, is the linking verb because it does not show an action; instead it links the subject with the object, which is kitchen.


And so that is sentences; at least short ones. Easy? We use them everyday; but maybe breaking it down shows how complex they can be so we can build on them and create new ones.

This book can be found here.

I found this book to be detailed, compelling, thought-provoking and shocking.

It is an historical romance, with so much detail given to the time period and the political and economical struggles at the time that I had to rethink what I knew of the English Monarch during the Tudor reign. The story is told from the female protagonist’s point of view and it sheds light on the royal family and the struggles of a person perceived as lesser or of little value other than to bear a male heir. The woman in this story is a unique and untold hero who faces real villainy.

I would recommend this book to anyone who loves historical novels, a strong female protagonist; stories revolving around historical Royalty; or, who is interested in learning an in-depth account of a story already told a thousand times before.

Here are other formats you can borrow of Gregory's book (including a television series).

It is also book five (5) in Gregory's Cousin's war series; but it is not necessary to read them in order.
Posted by Camden Council Library Service at Monday, August 10, 2020 No comments:


This book can be found here.

This book is about minimalising and simplifying things in your life and focus on what is really important, which we all could do with a bit of help along the way. It covers: the mind; the home; essential items; your wardrobe; the pantry; home furnishings, and staying minimal long-term.

Even the book's design is to appear clutter free: its A5 size and it's light to hold. Even the wording on the pages and graphics are  simply set out, bit of a go to pocket bible. here is an example below: 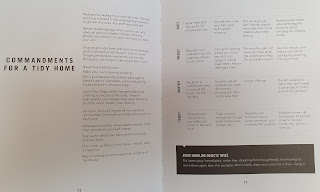 I absolutely loved reading this book!!

Alvydas Ŝlepikas' "In the shadow of wolves"

This book is originally titled ‘Mano vardas – Marytė’. The translated book can be found here.

Ŝlepikas has written what I would deem a short novel; but definitely not sweet. Before that puts you off, this book was also a Times Book of the Year for 2019, so even if it isn’t gentle, it may be a book to read.

If you do not know this Lithuanian author, he apparently is multi-talented: writing and directing for films; a poet; and a playwright. In this book, he has written an historical work that has been influenced by a couple of ‘wolf children’ themselves who wanted the world to know what it was like for them in post-war Prussia after World War II.

‘In the shadow of wolves’ follows the Schukat family and their lives in Prussia after World War II. It does not follow all their lives equally, and for most of the novel, it focusses on Renate. However, it looks at post-war conditions, issues with World War II, how children feel and survive during these times and what it is like for ‘wolf children’.

As an historical note, and for some background; ‘wolf children’ are children who have found themselves alone in east Prussia and have had to do many things in order to survive. Outside of this novel, if you would like an historical article for reference, you can visit National Geographic’s article here.

The plot may sound very singular, but the focus is on the gritty reality of trying to survive. In fact, it appears this is the most important part of the writing in order to help readers come to know the truth of what post-war situations can be like for children: a part of history that might not be well known by many. If you are looking for in-depth character creation or emotional tugs towards one human protagonist or another, you probably won’t find that here.

Ŝlepikas does not shy away on details of what can happen to humans and humanity during times like those. It is gritty, raw and very, very real. However, it is an important story to tell. As the writer has gone to great lengths to find stories to incorporate into the novel, it also makes it more authentic. If this is too difficult, particularly where it comes to children, probably skip this book.

But people should be aware of such histories.

Usually I do Readers’ Advisory here; however, Ŝlepikas has no other works in our library and there is not, as far as I can find, any nonfiction specifically on the wolf children. So, I have created a list of fiction and, mostly, nonfiction information and biographies that relate to children and their family’s experiences during World War II or afterwards. 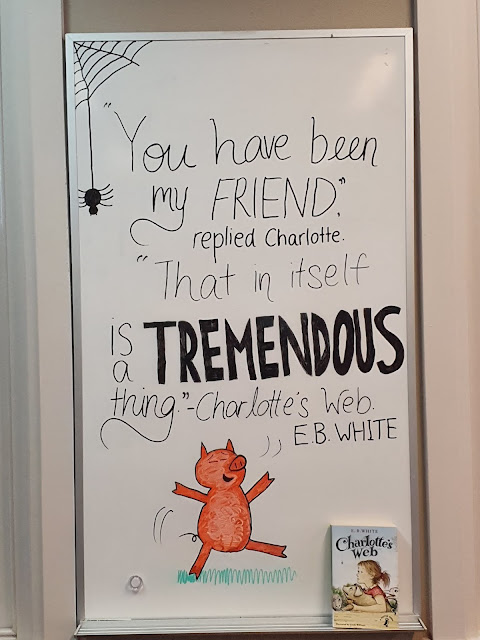 This image comes from Camden Library and its creative staff!
In times such as these friendship (with correct social distancing), is important for maintaining our emotional and mental health. Connecting via online options isn't as great as meeting people face-to-face like Charlotte and Wilbur were able to do; but connections are important to maintain anyway we can.
Hopefully all of you are still maintaining relationships with family and friends and talking through anything that may still be overwhelming as restrictions tighten and ease across Australia (depending on where you are).
Wilbur had Charlotte to talk through his worries about being fattened up and eaten (different kinds of problems, I suppose). But with the help of his friend; it all worked out (if you haven't seen the film or read the book, I won't spoil too much of the ending).
If you haven't read this book or seen the film, you can find a list of the available items here. This list also offers a book on the story of the writer E. B. White.
Happy reading ... and tell your friends and family about the reading experience, amongst the other important conversations we are all having 😀
Posted by Camden Council Library Service at Wednesday, August 05, 2020 No comments: