This month the Movie Club will be screening Good Will Hunting, directed by Gus Van Sant and starring Matt Damon, Ben Affleck and the late, great Robin Williams.

The film follows Will Hunting (Matt Damon), a janitor at MIT who is in fact a genius with a photographic memory and capable of completing the most challenging mathematical formulas with ease. This brings him to the attention of Professor Gerald Lambeau (Stellan Skarsgård) who sees the promise in Will although realising his troubling personality.

Lambeau strikes a deal with the judge at Will's latest assault trial to prevent him from going to prison, with two conditions: Will must work with Lambeau and attend therapy. Both prove difficult, but the therapy provides Lambeau with particular grief until he recruits Sean Maguire (Robin Williams), his estranged college roommate, who, like Will, is haunted by personal demons. 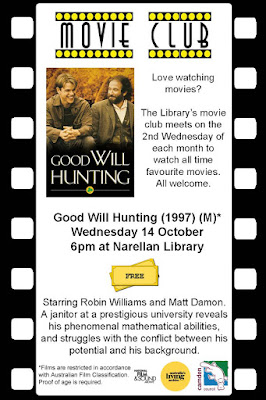 Through his sessions with Lambeau and Sean, Will grapples to come to grips with his enormous potential and his difficult upbringing, struggling to overcome his own prejudices and fears.

The script was penned by Matt Damon and Ben Affleck, and provided the the pair with their breakout into stardom. The film garnered much critical acclaim, not least for the performances. Robin Williams was especially praised, with his performance gaining him the Oscar for Best Supporting Actor. It also has many poignant parallels with William’s real life, brought to the fore by his tragic suicide last year.

The screening will be on Wednesday 14 October at 6pm at Narellan Library. Stay after the screening to share what about the film had the greatest impact on you, or join in a discussion about the films many powerful moments.


Andrew Neiman (Miles Teller) is an aspiring drummer enrolled at the prestigious Schaffer Academy. While there he is recruited by Terrence Fletcher (J.K. Simmons), an acclaimed conductor who leads the school’s most prominent orchestra. Fletcher’s technique to inspire the orchestra is aggressive and involves belittling, slurring, manipulating, and often physically abusing and threating. This drives Neiman to push harder, practicing until his hands bleed and sacrificing everything, including a promising new relationship and his safety, to become one of the greats like his idol Buddy Rich. Fletcher’s techniques get results, but at what cost, and are all people going to respond the same way?


Simmons is phenomenal in the role, teetering between being entirely abhorrent and sadistically charming while ejecting hysterical insults. Although ultimately providing a happy and unsettlingly inspiring ending, this is not your usual feel good, bravely overcome adversity musical-prodigy Oscar bait. The film is stripped to its core, with little other than the scenes of Neiman’s furious practicing and the confrontations with Fletcher. It is a rivalry entirely brutal in its execution, where the lines between stern encouragement and abuse become blurred and there are no easy solutions. In Neiman Fletcher not only meets his much searched for Charlie Parker, but his equal, who is willing to fight him to the end.

Whiplash is an uncompromising treatment of troubling interactions in an unflinching environment.
Andreas

The Real Housewives of Melbourne follow the lavish lives of several women in Melbourne. The characters include- Gina Liano who is a barrister and single mother and lives in South Yarra. Lydia Schiavello is married to a famous Australian architect and is studying design and has 6 children in total. Janet Roach is a property developer with 2 sons. Jackie Gillies is a psychic and wife of Silverchair drummer Ben Gillies. Chyka Heebaugh is the owner of 3 event companies and has 2 kids. And lastly Andrea Moss has a skin specialist business and has children and is married to a plastic surgeon.

From glamorous cocktail launches, to romantic getaways, these women enjoy the finer things in life and also relish the drama created between them.
Rating-M Sexual References and course language

Film Review - I give it a year By Director Dan Mazer

In this movie, I give it a year follows the life of a mismatched couple in their first year of marriage. Deeply in love and happy to overlook their differences, they wed even though their friends have doubts. Will they live happily ever after when there are old flames and new temptations around?
Rated MA15+- Strong sexual references, course languages and nudity.

This is a hilarious romantic comedy from the producers of Love Actually, Bridget Jones Diary and Notting Hill. A very enjoyable movie, it doesn’t disappoint.
Anne
Posted by Camden Council Library Service at Monday, September 14, 2015 No comments:

Book Review—The Girl with the Dogs by Anna Funder

Tess and her husband Dan have successful careers, three children, and live in a desirable if modest home in Sydney. Tess’ mother has passed away and her father is currently in a nursing home suffering from dementia. She suspects Dan may be unfaithful, a suspicion spurred on by her friends’ failed marriages. Amongst this Tess starts thinking about her youth in Europe and her relationship with Mitya, an artist. She leaves for a conference in London, and while there travels to Paris to see his latest exhibition and visit the path her life might have taken. 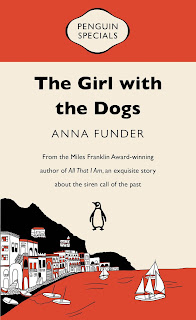 Funder contrasts the nostalgia of Tess’ father’s life, the seeming stability and certainty that came from a quieter simpler time, against the ever present life of the 21st century. Tess is confronted with the paradox that there was stability in her parents’ life despite the fragility of memory, yet in the modern world where social media, mobile devices and digital transfers record and haunt every moment there is nothing but instability. The fading of her father’s memories are more apparent than ever, with the family home being sold and his memories replaced by the latest pop Diva tunes. Tess desperately tries to counter this by attempting to revive another, abandoned life, one that is within her memories and away from the omnipresence of an i-Pad screen.

The resolution is a little too easy, too conservative, with the issue of infidelity easily quelled and the reuniting of the family resolving all. But that does not diminish the reverie in nostalgia that makes The Girl with the Dogs, with it fully embracing the loss and bittersweet spirit that defines that sensation.
Andreas

Labels: Anna Funder, infidelity, nostalgia, The Girl with the Dogs

Dr Mosley teams up with leading sports Scientist Professor Jamie Timmons and super fit health journalist Peta Bee. Focussing on HITT training the authors offer a range of workouts that take about 10mins a day for 3 times a week. Build the short workouts into your routine and read the scientific evidence that promotes the health benefits of this type of training. Fast Exercise is for everyone-those who want to lose fat and get fit in the most efficient way.

I have implemented HITT training into my fitness routine and am surprised with how fast and efficient it is. If you're interested in fitness then this book is definitely worth a read. Anne
Posted by Camden Council Library Service at Monday, September 07, 2015 No comments:

Malouf’s writing career spans many decades and numerous highly praised works. In this volume he shares his thoughts on other writers and, perhaps more interestingly, the role of reading in life and the writer in society.

Covering authors as diverse as Mann, Hugo, Proust, Kafka, Shakespeare and Homer, Malouf provides intriguing personal readings of their works and highlights unique perspectives. He reveals Kafka not as the surrealist, but as someone “who works so close to the facts of his own life”, and wrestles the enormity of the Iliad into a manageable, human work with relevance to 21st century life. The Shakespeare article is particularly interesting, as Malouf traces both the evolution of perception of Shakespeare in literary circles but also Shakespeare’s development in his treatment of material, shifting from performance to shared experience with the audience that makes his plays the most revered in the Western tradition. 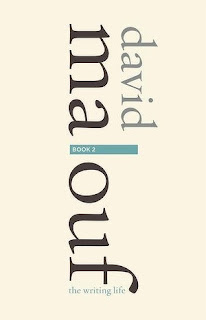 Many of these essays are not just valuable from a critical perspective, but a living one, revealing Malouf as someone who absorbs literature in order to live a fuller life.  These life-centric readings provide the volume with its greatest interest, and several pieces in particular exemplify the link between literature and life. But in opposition it also reveals the disconnect writing imposes on writers, where their social, talking selves are in opposition to, and occasionally in conflict with, their brooding, writing selves.

A volume of unique readings and personal reflections, The Writing Life is a fascinating record of a writer and, more importantly, a reader.
Andreas

Movie Club—Sunday Too Far Away

This month the Movie Club will be screening Sunday Too Far Away, directed by Ken Hannam and starring Jack Thompson, Peter Cummins and Reg Lye.

The film follows Folley, a gun (champion) shearer, who joins a new shearing time despite having left the biz. His plan is to lay off the booze, save up some money and move down the coast and buy a prawning boat. He quickly picks up his old habits and is once again immersed in the hard working and hard drinking lifestyle. At the same time, Folley and the other shearers face having a bonus taken away, with 'scab' (non-unionised) workers coming into town and undermining their labour strike. 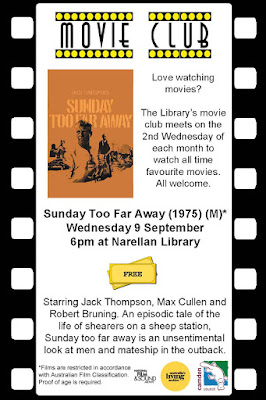 The film is considered one of the leading films of the Australian New Wave Cinema of the 1970s. These films were publicly funded, and one of the conditions of this arrangement was that they feature themes of Australian life. But film makers often used this opportunity to question assumed elements in national myths and icons, and Sunday Too Far Away is no different. The masculinity and mateship, the drinking and the larrikins are all on show, and often not in a  redeeming light.

Sunday Too Far Away will be showing on Wednesday 9 September @ Narellan Library (corner of Queen and Elyard Street, Narellan) @ 6pm. Tea, coffee, and biscuits provided, but you are more than welcome to bring your own snacks and beverages.

Stay after the screening and join the discussion about the film and its portrayal of life on a shearing station. Share your thoughts or use the discussion questions.
Posted by Camden Council Library Service at Wednesday, September 02, 2015 No comments: