Book Review—The Eye of the Sheep by Sofie Laguna

Jimmy Flick is a child with behavioural issues with a manic energy and fascination. His mother, Paula, is deeply protective of him with a strong and special bond. Gavin, his father, is an abusive alcoholic, like his father before him. His brother, Robby, is frustrated with the life he was born into and wants to leave, but feels a sense of duty to Paula and Jimmy. As Jimmy grows we see the struggles of different members of the family to remain personally whole while trying desperately to maintain their bonds, with the very members of these bonds receiving the brunt of these conflicts. 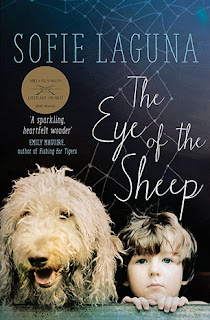 Laguna’s writing is striking in the voice of Jimmy, giving slanted, strange, surreal descriptions to the commonplace and the domestic. For him the acts of everyday life are cause for wonder, from the pipes that fuel the machinery inside us all, to the engine of crying and the taps that control tears, to the transfer of energy from a slap to a look and the clouds of laughter that float above our heads in moments of joy. But this does not detract from the brutal passages when Gavin strikes Paula, or the poignant scene when Robby makes his difficult decision. Despite their unusual expression these thoughts and emotions are still human, the reality of the actions and consequences immediately apparent.

The Eye of the Sheep is a mesmerising, warming yet gritty look at the struggle of domestic life in a working class family.
Andreas
Posted by Camden Council Library Service at Friday, July 24, 2015

1. Sentinel by Lee Child and Andrew Child
2. Marauder by Clive Cussler
3. All our shimmering skies by Trent Dalton
4. White fragility by Tara Robin J DiAngelo
5. Trust by Chris Hammer
6. Institute by Stephen King
7. Too much lip by Melissa Lucashenko
8. Missing William Tyrrell by Caroline Overington
9. There was still love by Favel Parrett
10. Weekend by Charlotte Wood