All his life Jack has lived in Room. He lives with Ma, along with Bathtub, Wardrobe, Bed, and Egg Snake. Jack has no conception of an outside world, with the only links being TV, which he believes is all made up, and Old Nick, the man who kidnapped Ma and has been keeping the two of them. Old Nick comes into Room most nights while Jack sleeps hidden in Wardrobe and rapes Ma as he has for the last seven years. Ma learns that Old Nick has been unemployed for several months and fears that if he loses the house he will kill her and Jack. She makes plans to escape, but getting Jack and herself out is only the beginning of the challenge, as she learns to live again and Jack must completely redefine his sense of reality. 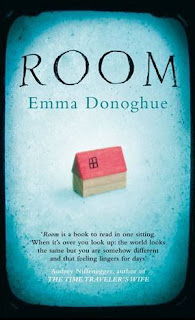 Told entirely from Jack's perspective the voice sets the novel as a work of exploration and discovery rather than a dark study. Although dealing with difficult subjects it uses these as catalysts for celebration, a celebration of life and the world despite the dark elements that often take hold and don't let go. We are transfixed by Jack's wonderment of life even while still in Room, and like Sofie Laguna's The Eye of The Sheep, which also gave a child's fantastical expression to troubling situations, Room utilizes this child's fascination to give these scenarios a rich, human quality that makes the difficulties more poignant without diminishing their impact or slipping into sentimentality.

Despite its dark origins Room is a surprisingly uplifting story of a life most unique and touching.
Andreas